The Battle of Smolensk

The Battle of Smolensk, the first major battle of the French invasion of Russia

The Battle of Smolensk, the first major battle of the French invasion of Russia took place on August 16–18, 1812, between 175,000 men of the Grande Armée under Napoleon Bonaparte and 130,000 Russians under Barclay de Tolly, though only about 50,000 and 60,000 respectively were actually engaged.

Napoleon attacked Smolensk occupied by Russian General Bagration’s corps and captured two of the suburbs. During the night the Russians evacuated the burning city.

Initially the Russians employed hit and run tactics against the Grande Armée. Napoleon therefore devised the Smolensk Manoeuvre in an attempt to sweep behind the enemy and inflict a decisive defeat. On August 14, 1812 forces under the command of Joachim Murat, Marshal Davout, and Michel Ney crossed the Dnieper River at Rassna using bridges constructed overnight. The plan was to race toward the city, taking it without a fight, and march north to attack the rear of the main Russian forces under the overall command of General Barclay de Tolly. Unfortunately for the French, conflicting orders and a breakdown in communication had already led Bagration to disobey orders and instead of marching west, he occupied Smolensk to the south. By August 16, French forces found the city heavily garrisoned by Bagration’s troops, further reinforced with the subsequent arrival of Barclay and the main Russian army.

Smolensk, an historic fortress city of 12,600 inhabitants on the main Western invasion route to Moscow was defended by bastion towers and a thick stone wall. The River Dnieper ran through the middle.

The Assumption Cathedral in Smolensk housed one of the most venerated icons of the Orthodox Church, Our Lady of Smolensk attributed to St Luke, and Napoleon assumed that the Russians would fight outside the city to avoid its destruction. 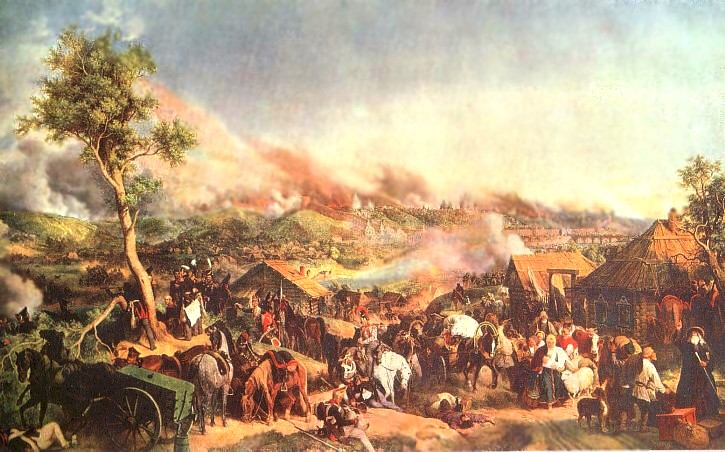 The Battle of Smolensk, the first major battle of the French invasion of Russia took place on August 16–18, 1812

The main battle was fought on August 16. An initial probing force captured two suburbs but failed to bring the Russians out to battle. Napoleon ordered a general assault with three corps of the Grande Armée, supported by two hundred artillery pieces. This was initially successful, the intense artillery bombardment setting the city on fire but the French forces lacked ladders or climbing apparatus to scale the city walls and were under counter fire from Russian artillery. By nightfall, most of the city was burning.
Estimates of casualties vary, Alain Pigeard quotes French losses at 4200 and Russian at 4000-6000. Russians put their losses at around 6,000, whilst David Chandler puts French losses at 10,000 and Russian at 12,000-14,000

To save the army, Barclay de Tolly abandoned the city destroying all ammunition stores and bridges leaving a small force to hold out for two days to cover his retreat.

Around dawn on August 17, Grande Armée Polish forces successfully breached the walls, and in a few hours the main French forces entered the city. Barclay retained forces on the other side of the river preventing a crossing until the night of August the 18th. The city was almost completely destroyed.

Technically the battle of Smolensk was a victory for Napoleon as he captured the city. However his soldiers were already running short of food and its destruction denied him a useful supply base, adding to the logistics problems caused later by the Russian scorched earth tactics.